Plant a tree in memory of Conrad
An environmentally-friendly option 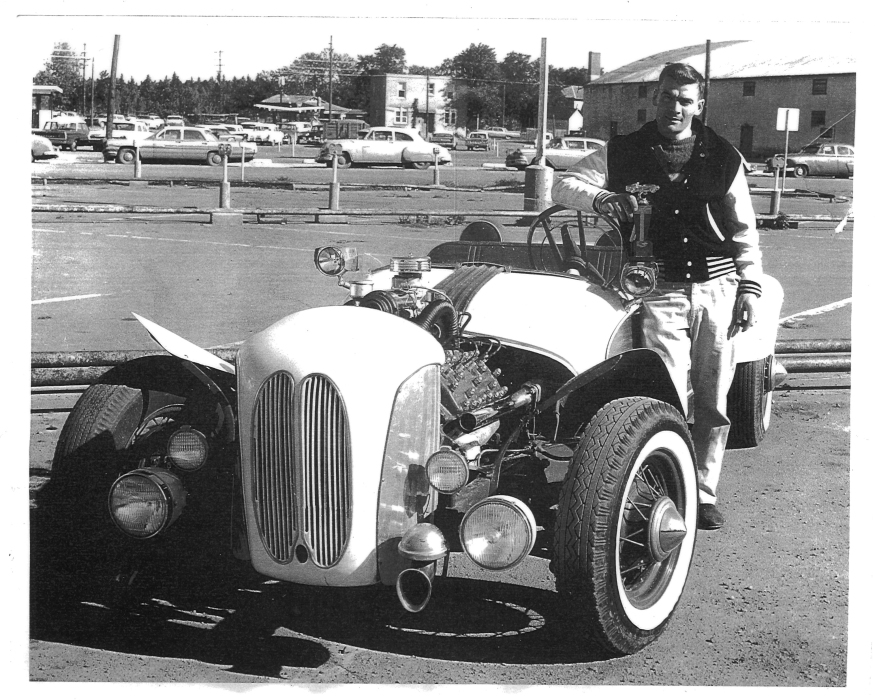 It is with deep sadness that we announce the sudden passing of our beloved Conrad Neil Richards (Con) on March 23, 2021. He passed quickly but peacefully with his wife and daughter by his side.

Con was born in Shellbrook, SK on January 8, 1936 with a steering wheel in his hand and an undeniable passion for cars. He met the love of his life, Isabel, and they married in 1957. As a young couple they didn’t have much but more important to them were Con’s custom hot rods! They spent weekends winning trophies at car shows or traveling to Calgary to visit Con’s mother (AKA Granny Dot). Having a wild side, Con liked to participate in demolition derbies with his brother resulting in a broken collar bone and other injuries but not lessening his spirited soul. Together they welcomed a daughter, Mitzi, in 1962 and a second daughter, Pamela in 1968. Con was a great father, fun-loving and supportive.

Forming the very first car club in Prince Albert he had many awards from car shows over the span of his lifetime. Known to all who were involved in shows and car restoration he was a legend in his own right. Being a “Ford” man was just a part of his DNA and his creative spirit lead to many unique and one of a kind creations.

He was a soft spoken, kind hearted man. He loved animals, antiques and British Columbia! The family endured annual trips through the mountains with a few vehicle breakdowns just to add to the adventure! More glorious vacations were to Disneyland, Disney World and Vegas, typically an excuse to bring home treasured cars or motorhomes along the way. The grandchildren were fortunate enough to have their own trips to Disneyland with “Nana and Bumpa”. Time was spent with Bumpa getting pulled around the yard on a sled, earning “Toonies” for soccer goals and later learning how to weld and work on cars. Bumpa loved his grandchildren and it showed!

Being an entrepreneur from a young age he founded many successful businesses. He started with autobody shops then developed the first garbage disposal in the city (EZ Disposal) and finally South Side Storage before retiring. However, he continued to buy and sell cars, making weekly trips to Edmonton and enjoying it until he was no longer able. He had a natural ability to develop a business and if he saw an opportunity he would make it come to fruition.

In 2007 Con fought the toughest battle of his life, spending a year in ICU. He showed unmeasurable courage and defied the odds, even paving the way for new procedures for others. He proved he was a survivor and that miracles do happen! Despite the incredible toll on his health he went on to successfully live another 14 years. During this time he traveled to Panama and Mexico to witness his grandsons wedding and spent many hours at the lake enjoying boating, jet skiing, barbeques (George’s pickles) and the good life!

Family and friends will never forget and forever treasure the miracle of having more time together. He will be greatly missed and our lives will be forever changed.

We would also like to say a special thank you to Angie and the River Breeze staff on the second floor for their care and compassion that has been greatly appreciated.

Con is survived by his wife of 64 years, Isabel; daughters Mitzi (Ryszard) Pytlak and Pamela (Darcy) Richards-Turton; grandchildren, Natasha (Zach), Dominik (Maggie), and Justin (Morgan); and his brother Bill Richards. He is predeceased by his mother, Dorothy Beattie and father, Ralph Richards.

As per Con’s wishes no formal services will be held and a Private Celebration of Life will be planned at a later date. Donations can be made towards the development of the Rose Garden Hospice in Prince Albert.  Donations can be made in the Development Office located in the Gateway Mall, online https://www.canadahelps.org/en/dn/26521 or by mail P.O. Box 2092, Prince Albert, SK, S6V 5R3.

Family and friends wishing to send messages of condolence may do so by visiting www.beaulacfuneralhome.com. Funeral arrangements have been entrusted to the care of Beau “Lac” Funeral Home, Marianne  Turcotte, Funeral Director Prince Albert, SK 306-763-3322.

Plant a tree in memory of Conrad by clicking here.
To send flowers to Conrad's family, please visit our floral store.

A service summary is not available

Plant a tree in memory of Conrad
An environmentally-friendly option

Plant a tree in memory of Conrad

1 tree planted in memory of Conrad

Con and I would sit and talk lots about cars and the ones he would build. I will miss those memories,  he was such a kind a gentle man
sending my condolences to the family and Isabel , love you both and miss you, from Lyle R. Demerais

Isabel and family, thinking of you at this difficult time.

Sending deep condolences and love to all the family. I remember "Bumpa" very well, he was such a gentle man. Take care of each other. xo

My sincere condolences to to the family.My thoughts and prayers are with you all during this difficult time

Isabel, Mitzi, Pam and families, we send our deepest sympathy for your loss, I grew up admiring Con’s ability to turn a piece of metal into a work of art. He was truly a car creative genius, unmatched by few, and he created many masterpieces. Growing up, we all spent many Christmas days at Grandpa and Grandma’s house on the farm. Con will be missed, and always remembered.

Plant a tree in memory of Conrad