Plant a tree in memory of Evelyn
An environmentally-friendly option 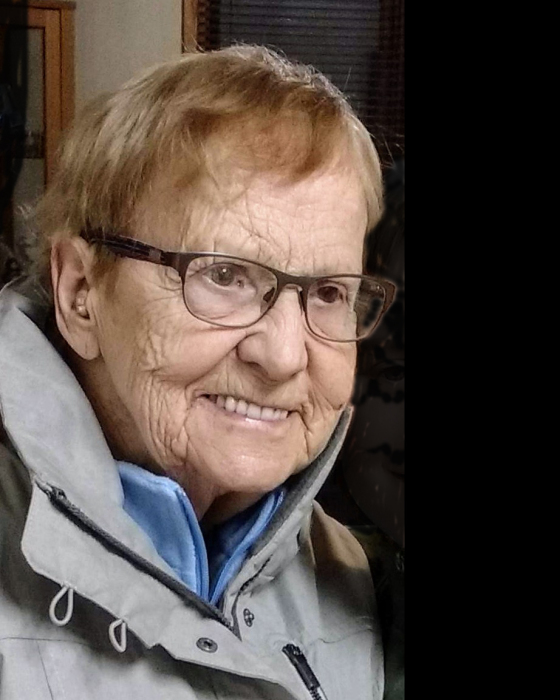 Evelyn Bardal passed away peacefully on March 28, 2021 in Victoria Hospital, Prince Albert Saskatchewan.  Evelyn was born in Glenside, SK, on February 7, 1933, the second daughter and third child of Stan and Hazel Crowley.  She came from a large family, with two brothers, Stan and Doug; and three sisters, Lois, Marg, and Sharon; and grew up on a farm near Tisdale, SK.  After high school, she met the love of her life, Konrad Bardal, and they enjoyed over 60 years together, until his death in 2015.  Evelyn and Konrad raised three children, Lorraine, Brad, and Stan.  In the early years of their marriage, the family moved around Saskatchewan, as Konrad worked with Highways, but eventually they settled down in Prince Albert, SK, in a house they lived in for 50 years.  Evelyn spent most of her working career with Health and Welfare Canada (now called Health Canada), and although she retired in the early 1990s, she remained friends with many of her coworkers to this day. For all those who knew her, Evelyn was a character who liked to laugh, and was not afraid to voice her opinion.  Evelyn and Konrad enjoyed camping trips to the lake (especially Waskesiu), puttering around in the garden, socializing with friends and family, and playing music.  Evelyn played the piano, and Konrad the horn, and although they didn’t play together very often, they both liked to listen to each other.  To their children, they represented the epitome of unconditional love; although each had their flaws, they saw the best in each other, and remained each other’s best advocates until the end.  Once Konrad entered Mont. St. Joseph’s Nursing Home in 2010, Evelyn visited him every day, spending as much time as she could with her ‘boyfriend’, as she called him.  Although Konrad had dementia, his face would light up every time he saw her, and he would always say ‘Ev, is that you?’, and she would respond ‘Kon is that you?’ and then laugh.  Evelyn resided at Caleb Village for the past 5+ years and delighted in visits from her many (18, at last count) grandchildren and great grandchildren, and even in the months before her death, would still engage them in races (walker-assisted) and (sometimes) let them win. The pandemic was hard on her due to the protocols preventing those personal visits from her grandchildren.  She will be missed by all those who knew her, for her smile, her laugh, and her devotion to her family and friends.  Most notably, she will be missed by her children, Lorraine (Alan), Brad (Jackie), and Stan (Jen); her grandchildren, Greg (Sara), Jenny (Bill), Melissa (Dustin), Jason (Tabitha), Chris (Nicole), Kalman and Cami; and great-grandchildren, Nicolas, Kaden, Cohen, Nola, Caleb, Noah, Miyah, Bentley, Ernest, Oscar, and Maggie; her sisters, Lois, Marg (Ed), and Sharon (Howard).   She was predeceased by her parents, Stan and Hazel; her brothers, Stan and Doug; her brother-in-law, Ernie Magnus, her sister-in-law, Phyllis Crowley; and her nephew, David Magnus.  A Memorial and Celebration of Life will be planned for this summer.  The family asks that in lieu of flowers, those so wishing may direct donations to Mont St. Joseph’s Home, 777 28th Street E, Prince Albert, SK, S6V 8C2, or to the Dube Centre for Mental Health, 103 Hospital Drive, Royal University Hospital, Saskatoon, SK, S7N 0W8.   Family and friends wishing to send online condolences are welcome to visit www.beaulacfuneralhome.com.  Arrangements have been entrusted to the care of Beau “Lac” Funeral Home & Crematorium, Lori Saam, Funeral Director, Prince Albert, SK 306-763-3322.

Plant a tree in memory of Evelyn by clicking here.
To send flowers to Evelyn's family, please visit our floral store.

Service to be announced at a later date

Plant a tree in memory of Evelyn
An environmentally-friendly option

Plant a tree in memory of Evelyn

2 trees planted in memory of Evelyn

Our condolences to the whole family. Aunty Ev will be missed!
Cathy, Dave and kids

I would like to pass my condolences to the family on the passing of Evelyn.
I met Evelyn when she was going back to tech school and I gathered up her books for her, and we remained friends ever since.  I would often pick her up from her house and later from Caleb Village to go for coffee.  She was such a wonderful person.
Eva Brewster

Laurie, Brad, Stan and family:
My condolences for your loss. I have known Ev for many years and I will miss her laugh and friendly greeting anytime we would meet. She will be missed by many. Keeping all of you in my thoughts and prayers.
Sharon Head

Remembering you and Evelyn in our minds and in our hearts. We have many cherished memories of Evelyn from the time we time we were close colleagues.
Blessings
Jim & Diane Miller

A Memorial Tree was ordered in memory of Evelyn Bardal by Jim & Diane Miller.  Plant a Tree

A Memorial Tree was planted for Evelyn Bardal

Plant a tree in memory of Evelyn